I spent part of my childhood living in the village of Jerusalem near Lincoln. It was a small village, practically one straight through road, a bit of dump and the air literally stank of death due to the rotting carcasses at the local maggot factory, "animal rendering plant".

This journal is the continuation of my photographic odyssey about Lincolnshire. The original images were shot for my book, Jerusalem. This journal adds to the project with additional text and occasional new images. Please bookmark me. 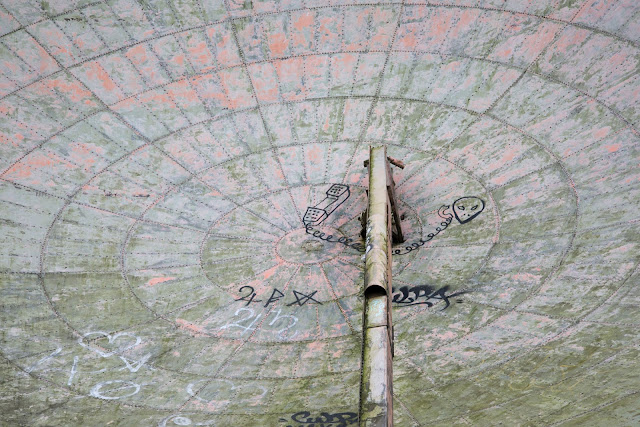 Rather than focusing on a particular style, viewpoint or photographic genre, I have adopted a more diverse approach, deliberately mixing social, political, topographical and historical imagery in order to create a personal travelogue. By UK standards Lincolnshire is big and to grasp anything of its character you have to cover a lot of road miles. Driving through this large agricultural landscape often feels like a road-trip to nowhere but, over time, just like joining the dots a more complete picture starts to emerge.

Lincolnshire has been bypassed by the A1, and until recently it had no motorway access at all. It was virtually an island, cut off on three sides by the sea and the rivers Humber and Trent. Until the Humber bridge was built in the 1970s access to and from the north was by ferry. There is still a sense of isolation here which tends to enforce an inward looking perspective. The long single lane roads to remote areas and sparse population can make Lincolnshire feel like a small scale version of the American mid-west. Migrant land-workers populate small rural towns where on the street you are as likely to hear Polish as English spoken. This feels very incongruous in a place that has historically been a backwater and has no big cities. Perhaps these are reasons why Lincolnshire recently voted overwhelmingly for Brexit.

The turbulent changes of the 20th century; fascism, communism, consumerism and the European Union have created a landscape of expired ‘grand narratives’. A Cold War jet fighter lies decommissioned in a motel car park, now reduced to an attention grabbing attraction for passing motorists. Giant Cold War communications dishes lay discarded on a hilltop. The runways of some WW2 airfields are used today as public roads. EU subsidies and farming practices have shaped the agricultural landscape. A stone lion stands nostalgic guard over a display selling eggs at a farm gate in reference to the lion stamp of regulated quality. Meanwhile, down the road a factory farm churns out millions of eggs from hens kept in tortuous conditions, living creatures treated as nothing more than another commodity.

Being largely flat and out-of-the-way, Lincolnshire was an ideal place to build WW2 aerodromes, so many that it seems like every village had one, hence the moniker ‘Bomber County’. This is where the Dambusters were based, and during the Cold War nuclear V bombers. The RAF still has a large presence here including, the Red Arrows, RAF College Cranwell and RAF Waddington AWACS base. Littered with aviation heritage sites and museums, Lincolnshire appears to be obsessed with it’s aviation history. The UK's tallest war memorial is currently being built as part of the new International Bomber Command Centre. Heritage and nostalgia wraps us up in a mythologised past, where time appears to stand still. Local newspapers feature endless stories of aviation heritage. You can take part in 1940s theme weekends. Shops sell inflatable Spitfires and display posters that recommend you “KEEP CALM and EAT SAUSAGES”. Ah yes, home of the famous Lincolnshire Sausage!

I spent part of my childhood living in the village of Jerusalem near Lincoln. It was a small village, practically one straight through road, a bit of dump and the air literally stank of death due to the rotting carcasses at the local maggot factory. I photographed the village road sign baring in mind the song of the same name but ironically, with the hedge behind it not being particularly ‘green and pleasant’.

By their very nature, photographs can be imbued with nostalgia and subjectivity, even though their original purpose may have been objective documentation. Sometimes, only subversive hints, glimpses and clues of objectivity or narrative can be seen in photographs, leading the viewer into a subjective interpretation of their own. Some images require specific knowledge to be interpreted, as the metanarrative is completely disguised in ‘reality’.

The Pride of Lincoln is a roadside motel and eatery housed in a converted windmill. Apparently, Lincolnshire once had more windmills than Holland, this being a point of local pride and the reason for the Pride’s existence. However, the converted mill is not real, it is a replica which has been purposely built to look like an old abandoned mill that has been converted for modern usage. As a double deception, it looks like any of the dozens of genuine old mills that have been converted for a multitude of other uses.

Lincolnshire’s new housing developments borrow from any number of historical periods and styles. Mixing and matching to create a fantasy for ‘modern living’. Seaside amusement parks cynically welcome people to fantasy worlds, offering escape from reality. The post-whatever world appears to be constructed from faded history and is seemingly, whatever we imagine it to be.

These photographs represent a journey through a landscape that I have known for more than half a century; I cannot escape the fact that it is an integral part of me.