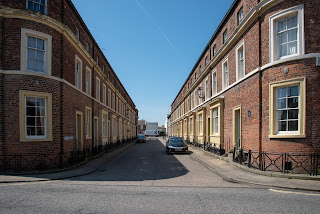 SHOULD you ever meet a film director scouring the capital for a perfect Victorian street scene in which to set his latest costume drama, do recommend Barkham Street. There is just one snag - it is not in London. Barkham Street was built - by both mistake and design - 128 miles away in remotest Lincolnshire. And it is still there intact, unaltered, immaculate, a curiosity in the little market town of Wainfleet, north of Boston, south of Skegness.

The Grade II-listed street is the most perfect, early Victorian metropolitan thoroughfare you will ever see. While it would be quite unremarkable in Lambeth, for example, in Wainfleet, with its population of 2,000, it is astonishing. The 19 houses of Barkham Street have a romantic - and possibly fanciful - history. In the 18th century, much of Wainfleet, an agricultural town that was the hub for many farms, was owned by Sir Edward Barkham, of the East India Company, to whom there are local memorials. 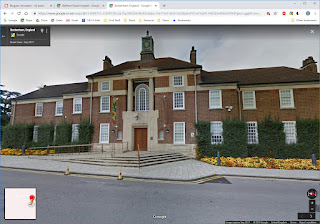 On Sir Edward's death, his estates were transferred to the Bethlehem Royal Hospital, in London, to whose trustees tenants paid their rent. However, in the 1840s, some of the Wainfleet properties were in poor repair and the tenants asked to be rehoused. The consulting architect to the Bethlehem Hospital was the respected designer Sydney Smirke. Smirke, son of the celebrated illustrator Robert Smirke, had learnt his craft as a pupil of his famous brother Sir Robert Smirke.

Sir Robert, who moved in the most illustrious circles, is best remembered for the capital's General Post Office in St Martin's-le-Grand and for the British Museum, the façade of which was completed in 1847. It was in that year that his brother Sydney was asked by the Bethlehem trustees to attend to the needs of their tenants in distant Wainfleet.

It has been suggested, probably romantically, that the Bethlehem Estate Office drawer marked "W" was withdrawn, and instead of Wapping appearing, Wainfleet was mistakenly picked. What is more likely is that Sydney Smirke had never heard of Wainfleet and, imagining that land there was at as much of a premium as land in the capital, promptly designed a street to fit his normal Bethlehem briefs.

A firm of builders in Hull - Forman and Frow - was commissioned to build the street exactly to Smirke's plans, for £7,449. And so, to local amazement - which endures to this day- a London street identical to any on the Bethlehem Estates, was erected in deepest Lincolnshire.

After the First World War, the Bethlehem Hospital began to dispose of its Lincolnshire holdings. Barkham Street, as a whole, was bought by a local builder, J T Turner and Sons, a firm founded in 1870 which had, for many years, attended to the Bethlehem Hospital Estates' needs. The company still owns the entire street.

In the 1960s, the houses were given a much-needed facelift and, in the past four or five years, a total restoration has taken place. The splendid iron railings, which were removed during the Second World War in the drive for scrap metal, have been replaced in replica. David Turner, the company's joint managing director, says: "My grandfather bought the street in 1920, largely because we did all the local work for the Bethlehem Estates.

"We let the houses - they do not come up for sale. We could let them five times over, such is the demand for housing in this part of the county. We are particularly pleased with the restoration of the railings, which are now exactly as they were," Mr Turner adds. "We used surviving fragments as templates." Lincolnshire is an "unknown" county, full of surprises. But visitors to Wainfleet - and there are few - can guarantee to have their breath taken away by the sight and the scale of Barkham Street.

All around are the humble pantiled cottages and shops of a modest town, whose claims to fame rest jointly on the wonderful ale of Bateman's brewery and the remarkable, 15th-century Wainfleet School, founded in 1484 by Bishop Waynflete of Winchester. Its greatest jewel, meanwhile, remains relatively undiscovered.